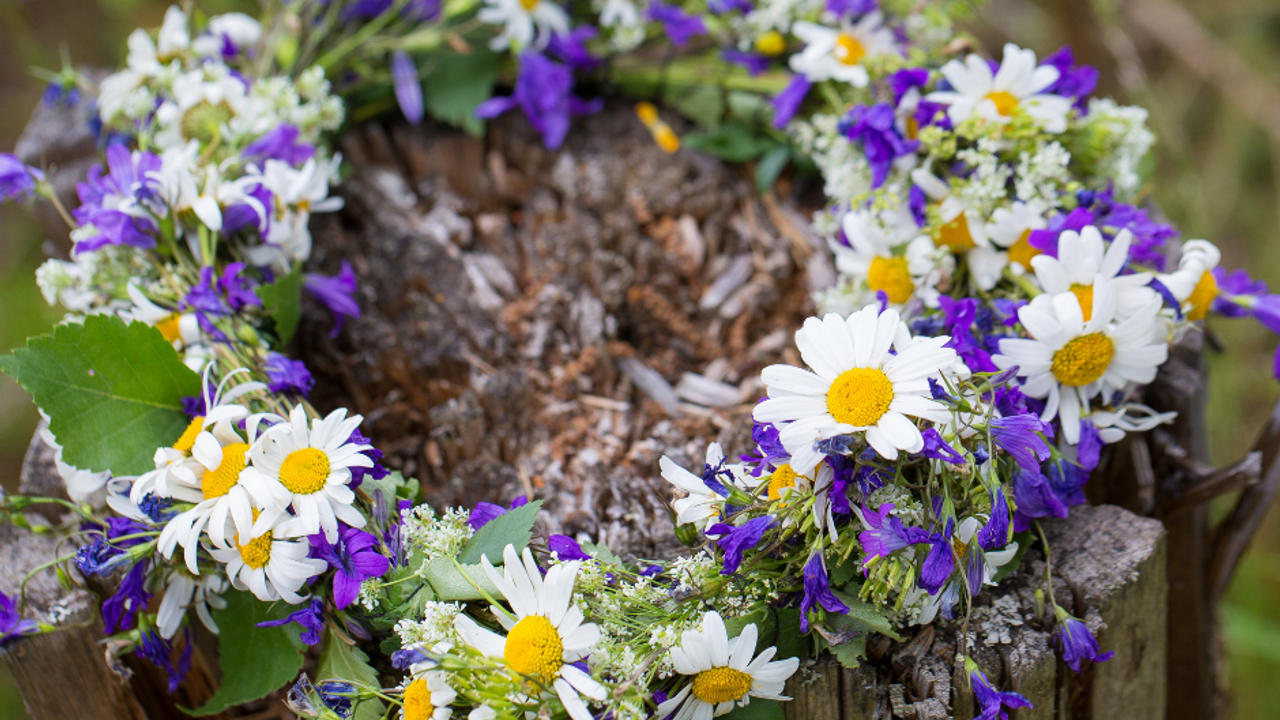 In the midst of summer, we are more likely to be immersed in the moment, the here and now, and if there is the possibility then we will be enjoying the great outdoors more than ever before. The prospect of a midsummer may greet us with a surprise, and this year for the first time for many, will give us a chance to think about the past rather than just the ‘fun in the sun’ that we want to enjoy.

In medieval times, ‘midsummer’ was a loose community celebration that ran between Saint John the Baptist’s Eve on 23 June to Saint Peter’s Day on 29 June. Actual Midsummer’s Day is missed out completely as 24 June, the Feast of Saint John the Baptist, was traditionally considered midsummer. The festivities centred around fires, flowers, and feasting. Doors were adorned with birch fennel, lilies, and wildflowers, and in the evenings bonfires and lamps would be lit outside shops and houses, food and drink laid out on tables, and neighbours invited to partake. A perfect excuse now and then to get together with the local community, spend time enjoying each other’s company with convivial conversation, a positive outlook and gratitude for the opportunity to do so.

Midsummer cushions were children’s contribution to the floral bounty of what must have been a magical time. They were made in various ways - some from a board smeared with clay or mud and then stuck all over with petals, and some made from an actual cushion that was threaded with wildflowers. English poet John Clare wrote that children would take a piece of ‘greensward’, or turf, and stick it with meadow flowers to place in their homes or gardens to celebrate the natural abundance of this golden moment in the year. He was so enamoured with this festival and traditions that he titled one of his poetry books The Midsummer Cushion. In his native village of Helpston, local children today still make midsummer cushions to decorate his grave on the closest weekend to his birthday on 13 July.

Back to John the Baptist, known originally as Yohanan, who resided in a time where there was both political and religious turmoil. He was a wild man but also a prophet who deliberately courted the empty places and landscapes beyond civilisation. He was a prolific preacher and considered that the time was imminent that the kingdom of God would be realised. Yohanan had his own movement, his own group, and his own followers. He is most famously known for baptising Jesus, known as Yehoshua, who himself ended up being strikingly successful. John the Baptist was a wild maverick in first century AD Palestine in comparison to Jesus and is considered by many to be the forerunner to Jesus, paving the way for the movement known as Christianity to begin.

From a Christians perspective there is lots to celebrate and why not do it with flowers, fauna, music, and food amongst community members? The midsummer that is recognised is when the North Pole is at its maximum tilt towards the sun. The sun will be overhead at the Tropic of Cancer, which is the northernmost latitude at which the sun can be directly overhead. The word ‘solstice’ from the Latin word solstitium - which means sun stopping - is the position on the horizon at which the sun rises and sets and stops and reverses direction.

Social - Use any opportunity to spend time getting to know your local community and others in it. If possible, consider recreating some of the ancient traditions like the Midsummer Cushion or even a street party.

Moral - What would you like to celebrate? Find a way to show gratitude and appreciation for what you have already.

Spiritual - Use this month to focus on eating food that is locally sourced. There should be an abundance of broad beans, artichokes, asparagus, French beans, peas, lettuce, radishes, fennel, carrots, beetroot, new potatoes, spinach, onions, turnips, and cauliflowers to enjoy. Use your local farm shop to purchase these vegetables and more. Enjoy your meals whilst contributing to your own and local community.

Cultural - Adorn your house with flowers from the season, for example roses. Mix them with Alchemilla, scabious and hardy geraniums in a visual arrangement as a feast for the eyes. Or simply place a single peony flower floating in a bowl of water or choose a small, scented posy of clove pinks, lavender, and lemon thyme for a bedside table.